family’s farm in the Wollaston Hill area of Quincy in the 1600’s.

In 2006 the garden club created, and still maintains this garden dedicated to Hutchinson on the hillside, with the Roxbury puddingstone marker that commemorates “the place where she tarried…” in her exile from Massachusetts Bay Colony in 1638. Two other civic groups from Portsmouth, Rhode Island and White Plains, New York, share with the garden club annually news and programs commemorating Hutchinson’s life. Former club president, Jan Clifford commented “Wollaston Garden Club members are inspired by this strong, determined colonial woman, who as a midwife gardener had a farm and a home, right here in Wollaston.” 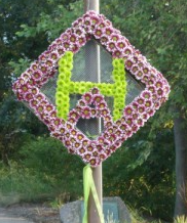 For the past four years, in celebration of Anne Hutchinson’s summer birthday, a floral arranger from the Wollaston Garden Club has created a hanging wreath design for the memorial sign at Anne Hutchinson Square at the corner of Newport Avenue, Beale Street, and Grandview Avenue in Wollaston.

This year’s design is a monogram wreath, created in a pave’ design style, by club past president, Ruth Griffin, who is also club Special Projects chair and studies floral design with a Sogetsu School of Ikebana teacher. Griffin has designed many times for the Museum of Fine Art’s Art in Bloom. She explained her wreath design in this way. “The square oasis represents the site; enclosed in the square is a large “H” and a smaller “A” which symbolize the initials of Anne Hutchinson. The floral monogram pattern was chosen for its visual impact and simple lines. The contrasting color poms were selected for their texture, size, and shape. Each one was individually inserted in the oasis to clearly spell out the initials and perhaps attract some attention to this historic site.” The sunny, windy, and dry conditions of Anne Hutchinson Square, along with the summer heat, make this a very challenging project. 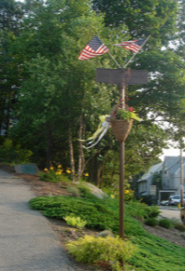 Anne Hutchinson’s 420th birthday was celebrated in three states this past July: Massachusetts, Rhode Island, and New York – all former colonies where Anne lived during her life time. Wollaston Garden Club honored the historical figure by sponsoring a design competition among its members. The winning design was created by club president Pat Artis, and is a beehive style hanging planter – planted with heuchera, gallardia, sedum and sweet potato vine.

Anne Hutchinson Square, the public area at the hillside at Grandview Street and Beale Street in Wollaston has long held important value in this city full of historic figures and sites. A Roxbury puddingstone boulder marks the site where Anne Hutchinson “tarried here” – on her exile from Massachusetts Bay Colony. William Hutchinson, husband of Anne Hutchinson, owned a land grant and had a farm in the Wollaston Hill section of Quincy in early colonial times. The garden club first became interested in Hutchinson because of her connection to Wollaston, her role as a strong and determined woman, and as a midwife gardener with an extensive kitchen and herb garden.

The Quincy Parks Department and the Wollaston Garden Club collaborated to move the stone marker to the hillside, and re-design and landscape the site in 2007. Since then the garden club’s civic beautification committee under the direction of its chair and garden club past president, Jo Costello, have diligently worked to improve the plantings at the hillside garden. Costello commented on “how well both the juniper, snow in summer, and Mary Todd yellow day lilies have filled in on the steep slope.” Anne Hutchinson will continue to be remembered each July by the Wollaston Garden Club.